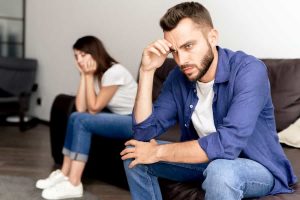 The mental health crisis and lack of funding is fuelling divorce according to lawyers at JMW Solicitors, who have seen an increase in cases where mental illness has led to marriage breakdown.

In almost half (45%) of the firm’s divorce cases in the last year, at least one person was experiencing depression and/or anxiety which had contributed to the breakdown of their marriage. Abuse – emotional, physical and/or sexual – was also a factor in 25% of cases.

While divorce rates in England and Wales have fallen successively in recent years, the decrease can in part be attributed to the corresponding reduction in couples getting married. 2018 saw 92,361 finalised divorces, with couples remaining wed for an average of 12.5 years.

The number of children and teenagers diagnosed with mental health problems is also impacting divorce rates, with the stress, worry and pressure of caring for offspring being a major factor and sometimes final straw, in the breakdown of the parental relationship.

“Whenever a spouse is unwell – with any illness – it puts a tremendous amount of pressure on the relationship. Where mental health is concerned, although it’s every bit as serious as any physical illness, help isn’t always forthcoming. It’s no secret that mental health services are stretched, and these figures illustrate the human cost of the failure to support those who need it; the family unit being the ultimate casualty.

“While there has been a lot of work to eliminate stigma around mental health, there’s still a long way to go – in countless cases, we’ve seen husbands and wives refuse to seek help due to embarrassment, pride or a sense of shame, eventually ending in divorce when the other spouse feels their only course of action is to end the relationship. Often, things have escalated to such an extent that abuse becomes a factor, in some cases involving the children or posing a danger to life.”

“Most people struggling with relationship breakdown will experience some symptoms of anxiety or depression, triggered by a whole host of emotions, from shame and guilt through to grief, loss and denial. Symptoms associated with mood disorders and psychoses are also exacerbated by the stress and anguish of separation and divorce.

“Feeling anxious, sad stressed, scared and destabilised is normal at a time of seismic change.  What makes people content, fulfilled and gives emotional stability are good and meaningful relationships – there are many people out there who are finding that mental illness is impacting their relationship, but they either aren’t seeking help, or support isn’t forthcoming or available quickly enough. Eventually, if not dealt with, the result may well be breakdown of the relationship.

“Effective, non-clinical support must be made more readily available to those suffering with mental illness – treatment doesn’t always mean medication; opening up and talking is the place to start.”

“Divorce can be a difficult and stressful experience, so the added pressure often exacerbates existing mental health issues. It’s extremely sad to see; particularly where, with help and support at a much earlier stage, things could have been very different.”