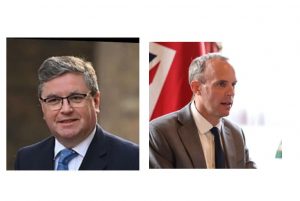 Buckland, who is MP for South Swindon, is the eighth Justice Secretary since 2010 when the Conservative government came to power. A lawyer and former judge, he has served for just over 2 years.

“It has been an honour to serve in Government for the last 7 years, and as the Lord Chancellor for the last 2. I am deeply proud of everything I have achieved. On to the next adventure”

Law Society president I. Stephanie Boyce welcomed the appointment of a solicitor to the role commenting

“We welcome Dominic Raab to the post and look forward to working with him,”

“He is only the second solicitor to have the role in history and takes the helm at a pivotal time for the justice system – with backlogs continuing to bedevil the courts and with some criminal trials delayed until 2023, leaving victims witnesses, and defendants facing long delays in securing justice.

“With the rule of law and access to justice firmly in the spotlight, and with the spending review on the horizon, we hope the new lord chancellor will play a key role in advocating for sustained investment across the entire justice system.

“I would also like to thank Robert Buckland QC for his service to the justice system during an extremely challenging time.”