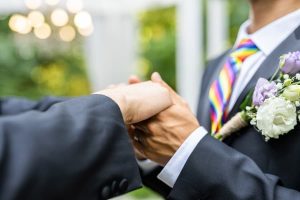 The Welsh Church’s Governing Body is considering a Bill set to authorise a service of blessing for gay and lesbian partnerships or marriages in Welsh Churches, this month.

On 6 September the Welsh Church Governing Body will debate a Bill, allowing for the first time, same-sex couples to have their marriage or civil partnership blessed in a Church. The Bill proposes a series of experimental services that will be opted-into by individual clergy for the next five years. Same-sex couples will still, however, not be able to marry in a church.

The Bill comes following calls from members of the Welsh Church Governing Body that by having no formal ceremony to recognise people in committed same-sex relationships is “pastorally unsustainable”.

The Explanatory Memorandum to the proposal stats that:

“Approval of this rite would be stating that the Church in Wales accepts that the loving and faithful commitment of two persons of the same sex, aspiring to life-long fidelity and mutual comfort, and who have made a commitment in civil partnership or marriage, is worthy of acceptance by the Church by asking God’s blessing upon their commitment.”

Church Bishops are consequently requesting that the Bill is debated in a respectful manner and have issued a set of “Pastoral Principles” to guide discussion and debate.

The Principles state that:

“There can be no room for seeking to undermine sincerely held views. Neither should we seek to walk away from each other. Our union in Christ is at the heart of our life and the bonds and character of our baptism hold us together; sharing a commitment to each other as together we seek the Kingdom of God. We hope these materials will stimulate this quality of engagement.”

The Bill will be discussed at the International Convention Centre Wales in Newport and will be live-streamed via a link on the Church in Wales website and Youtube channel.

While recognising that the Bill is controversial, members of the Governing Body have described it as a “step on the way towards repentance of a history in the Church which has demonised and persecuted gay and lesbian people, forcing them into fear, dishonesty and sometimes even hypocrisy, and which has precluded them from living publicly and honestly lives of committed partnership”.

Elsewhere in the UK, the Scottish Episcopal Church voted to allow gay couples to marry in church in 2017, making it the first major Christian church in the UK to allow same-sex marriages. The Church of Scotland, however, does not currently allow gay marriage.

Currently in England, The Church of England does not recognise same-sex marriages, does not permit the blessing of same-sex unions and only allows celibate gay and lesbian clergy to minister.